SEARCHING FOR PEACE IN TROUBLED TIMES

Imagine a white wall. Not too tall, but wide enough. On this wall are hung a collage of images. Some images are still, some are moving. A large-scale landscape image dominates the composition. A projector, hung from the ceiling highlights the landscape, flickering subtle shadows across the french mountain meadow during sunset. What is that pattern?

Amidst a bricolage of framed movie stills, a black and white keffiyeh hangs centered on the wall, itʼs fringe limp and windless. Three round, analogue, school clocks marks the time in New York, Paris, and Palestine

A digital ticker tape whizzes red text across itʼs face and is gone in a flash.

There are flat-screen televisions mounted to the wall as well: one plays a video clip “overlapping memories” in a loop; the other a series of video stills , bleeding into one another with glacial transitions. Small Iphone pics are tacked to the wall in measured intervals, as well as lined paper filled with scribbles and notes. Peppered amongst the images are six noise-canceling headphones, hung at various height from hooks from the wall, their cords pooling in the floor. Electrical cords from video players and televisions snake down the wall, suggesting a loose tapestry. Shadows from a second projector cast a pattern across the floor, cloaking the bodies of the viewer in the barbed- wire, fishnet of the keffiyeh.

The film being shown is Nina Goedéʼs “MY MONT D’OR,” just released in New York City at the Anthology Film Archives, NewFilmmakersNY Festival on October 4th 2017. The images collected between 1982 - 2016 form the body of a retrospective based on *OPERA BRUT projects. This multi-media, interactive, installation is based on a single theme: SEARCHING FOR PEACE IN TROUBLED TIMES.”

Our aim to explore Goedéʼs filmmaking process as well as to glam insight into the content and context of “MY MONT D’OR.” The retrospective will reference through images a long history of other works by Goedé and allude to the autobiographic nature of the work.

Ambient sound plays in the room, unexpectedly interrupted by more prominent sounds mainly from the movie soundtrack of “MY MONT D’OR”.

An interactive website will be setup for the exhibition. Three questions around “searching for peace in troubled times” and a live video of the exhibition space will provoke written comments of the visitors. These dialogs and reflections will appear visually on a digital ticker tape on the gallery wall.

The visitors in the exhibition will also be able to write comments directly on their smart phones as SMS, Whatsapp or by visiting the web site.

The visualization and sonification will use advanced DSP techniques created in real time.

The stills from OPERA BRUT projects are mounted on frames 20“ high and 25” long.

head-phones on the wall, when not associated with a specific video will play music from the OPERA BRUT ALBUM/2017
Video clips from exhibitions and performances of:

CAMELIAS CURTAINS SISTERS MEMORIES 1995 1996, involving video still diptichons, and a mobile sculpture with music in it.

XENIA 1993 1998, an exhibition with several monitors and projections on big paper elements. performed in Berlin and NYC at Experimental Intermedia,

OLYMPUS OVER THE CITY 2004 2009, performed at the New York University, (department of music and theater), brought to Paris in collaboration with Iannis Xenakis Studio CCMIX and performed at Les Laboratoires d’Aubervilliers (Paris).

Live performance program within the exhibition space:
One or two times there is the screening of “MY MONT D’OR “, a 85 min feature film, shot with an

iPhone.
(The film can be projected either on a screen or on a wall).

A live concert (duration: 60 min.) including an OPERA BRUT live performance (duration: 20 min) based on visual and sound research.

selected answers and comments of the interactive web site will be used as material within that performance.

the performers:
Stefan Tiedje aka Tj-Shredder, sound engineer and electronic musician playing his self created

*OperaBrut: Since 1983, Goedé has been developing the performance art form she calls Opera Brut. Opera Brut works always involve certain elements: Installations, often comprising found objects, occupy the performance space.These installations are abstract and mutable they are not static decor, performers manipulate them and adapt them as landscape, costume, props, etc. The effects of lighting, particularly projections, further expand the range of the installations. A live chamber orchestra shares the stage with dancer-actor-singers; while each performer has a particular talent, any one may sing, move, speak. The live music is layered over a pre-recorded electronic score, which structures the work. Performers are as mutable as the installations, they too may

change character or function throughout the performance.Though Goedé conceives and produces the opera, collaborators are integral to its realization.

Requirements for the installation:

an exhibition room,(at least 30 feet long and 20 feet wide), a sound system for the installation, a small system for listening with headphones, 2 to 3 flat screen monitors, a

video projector, a recent computer for real time processing.Requirements for the performance: The concert exhibits state of the art sound spatialization and video projections. Therefore a multi channel sound system with 4 to 8 loud speakers and video projection equipment will be required. Other details like mikrophones and mixing systems have to be determined according to the actual space. 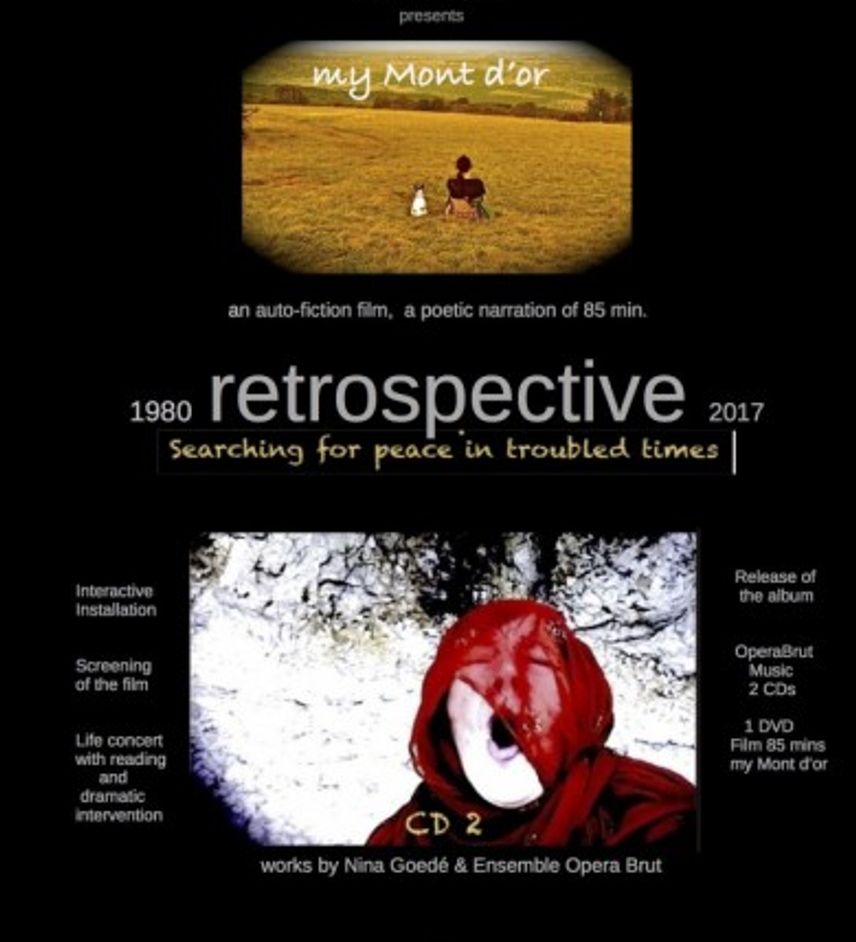 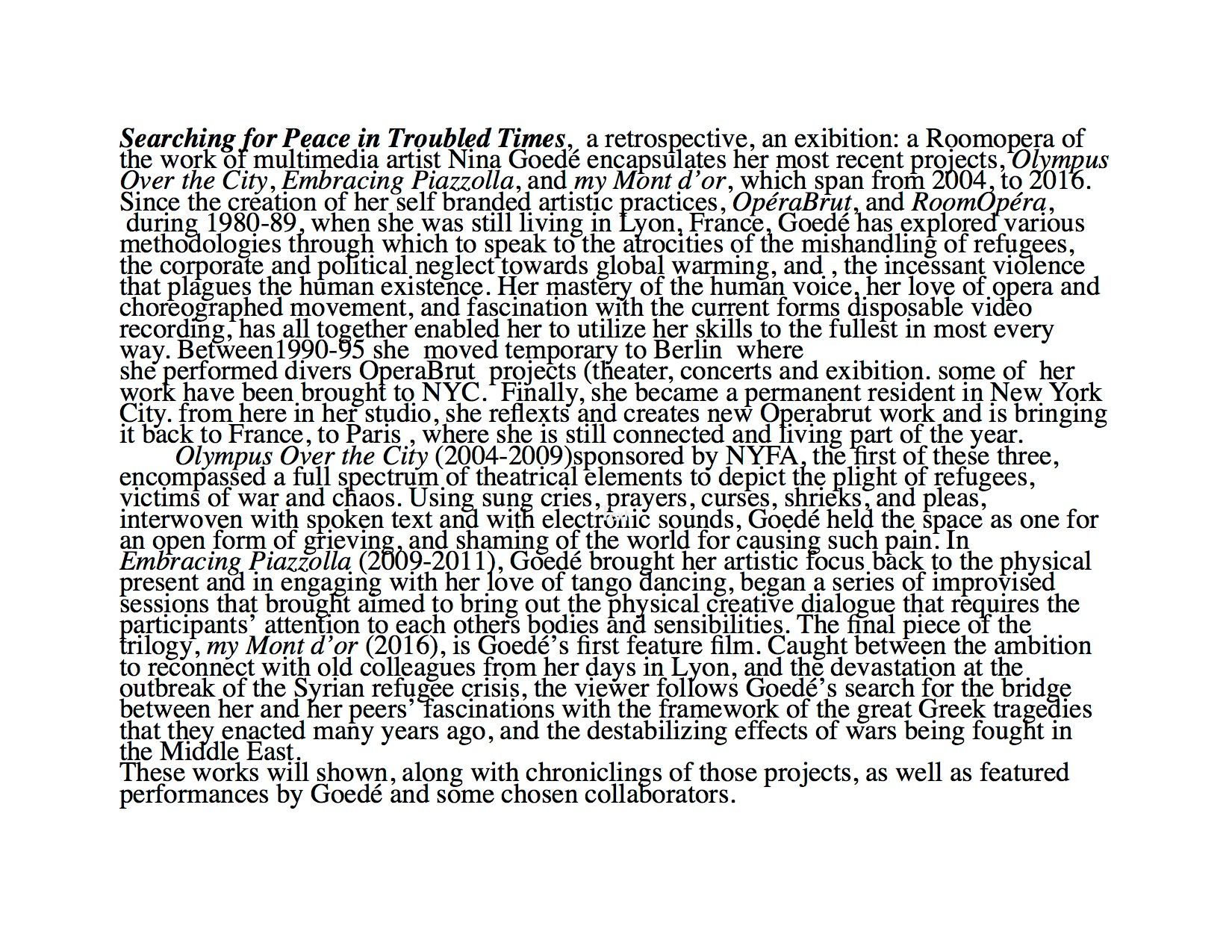 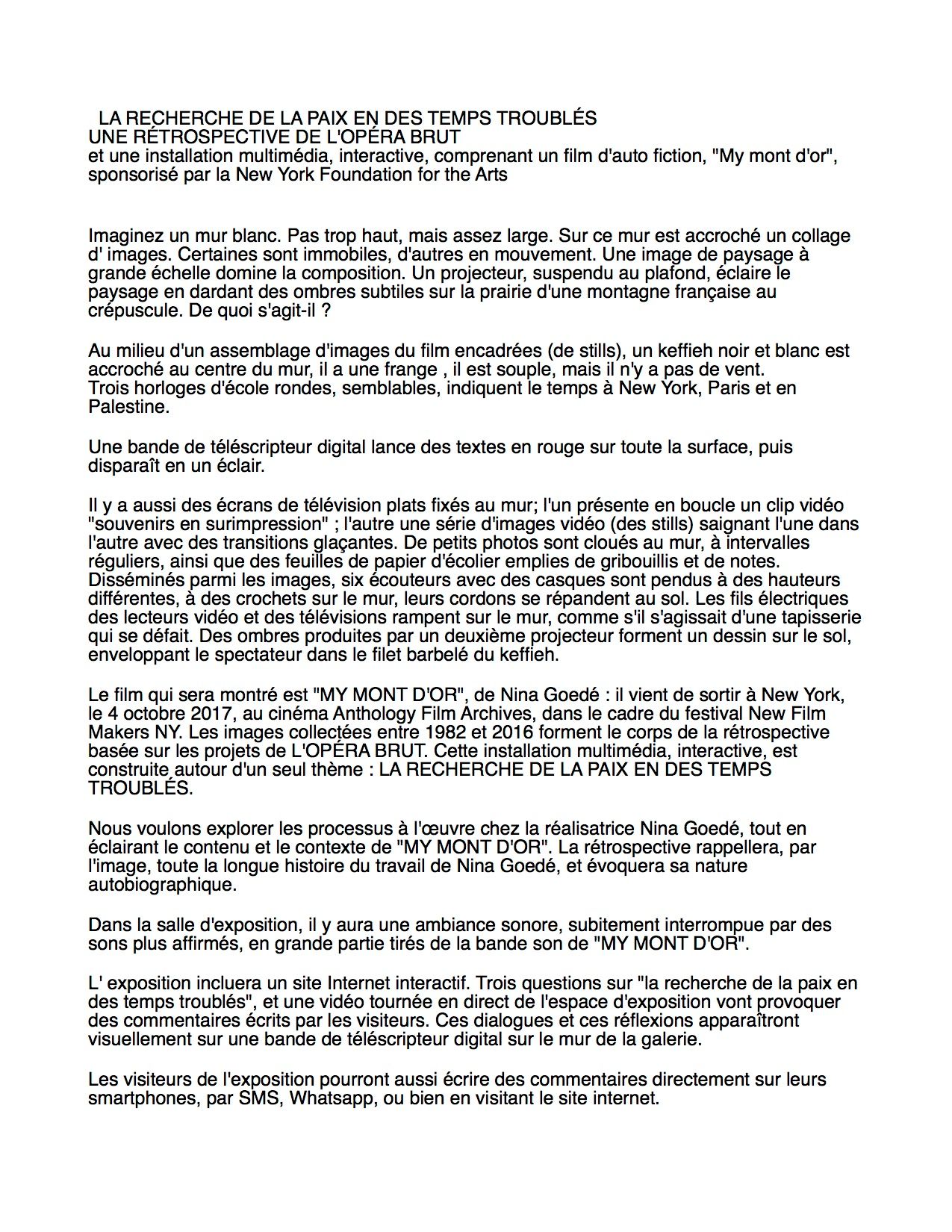 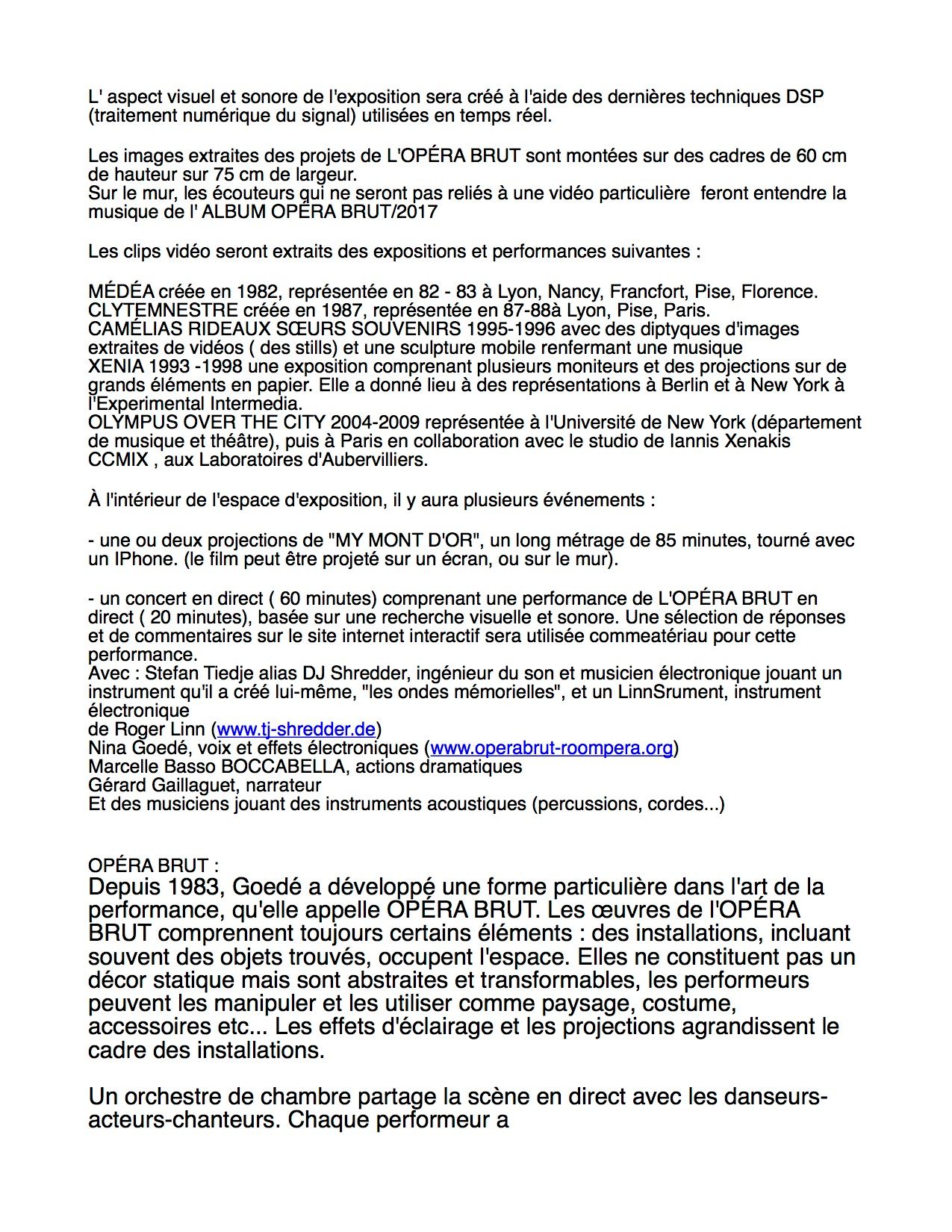 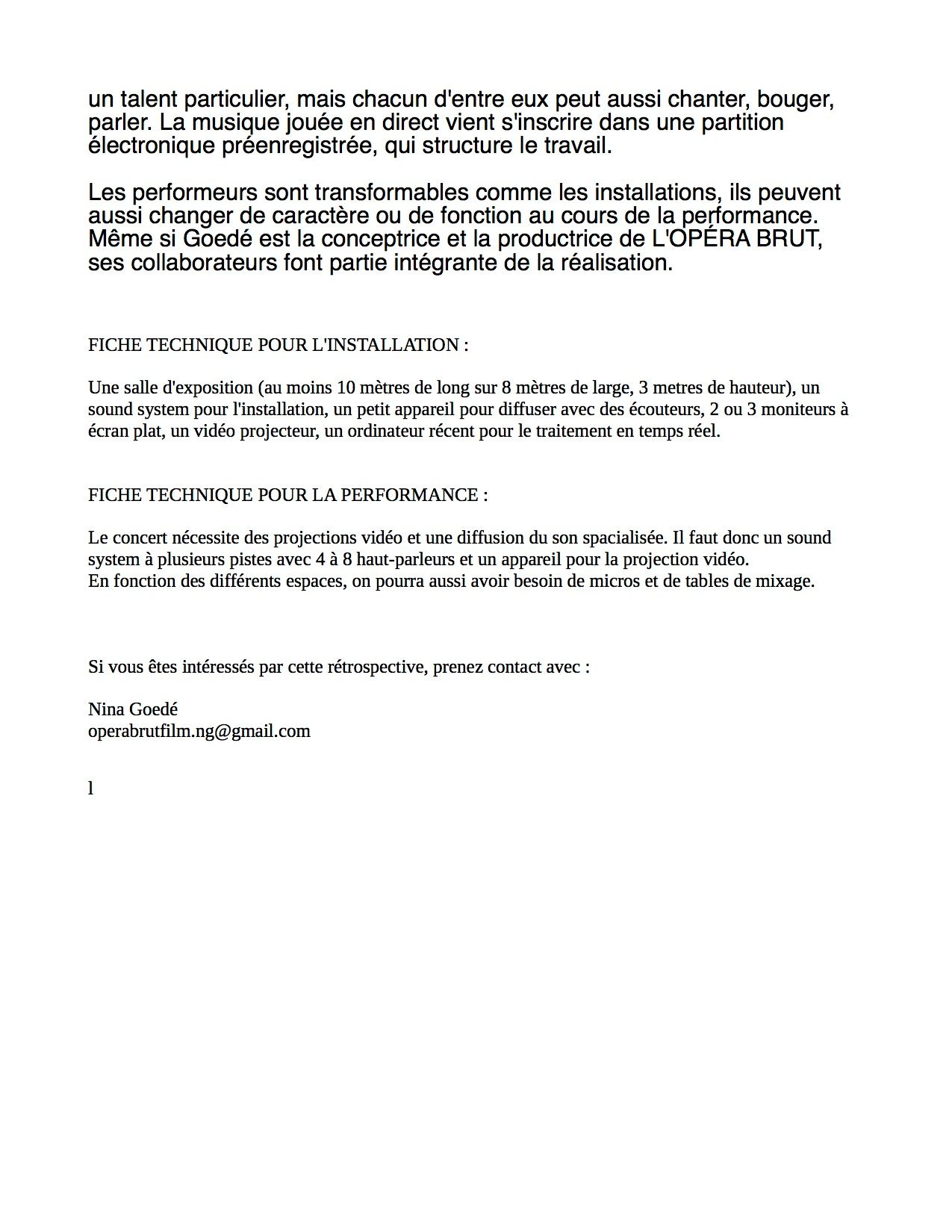